One of my projects involves graphs; specifically, it involves taking individual graphs and turning them into one big graph. If you've taken my Network Analysis Made Simple workshops before, you'll have learned that graphs can be represented as a matrix, such as the one below: 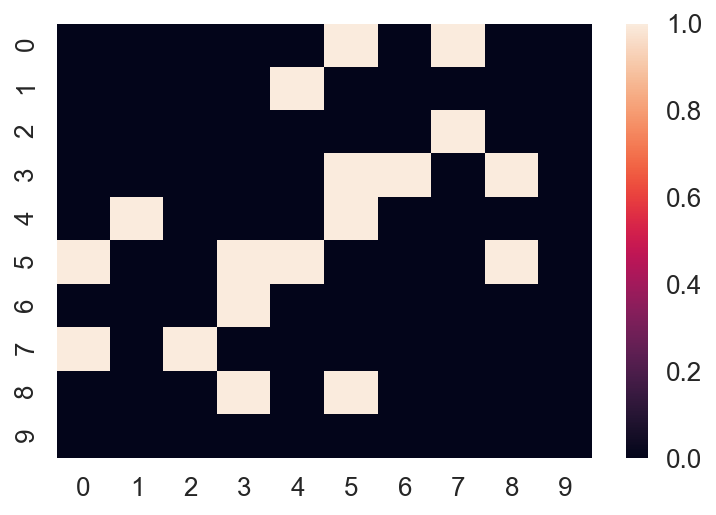 Because the matrix is so sparse, we can actually store it as a sparse matrix:

The most straightforward way of storing sparse matrices is in the COO (COOrdinate) format, which is also known as the "triplet" format, or the "ijv" format. ("i" is row, "j" is col, "v" is value)

If we want to have two or more graphs stored together in a single matrix, which was what my projects required, then one way of representing them is as follows: 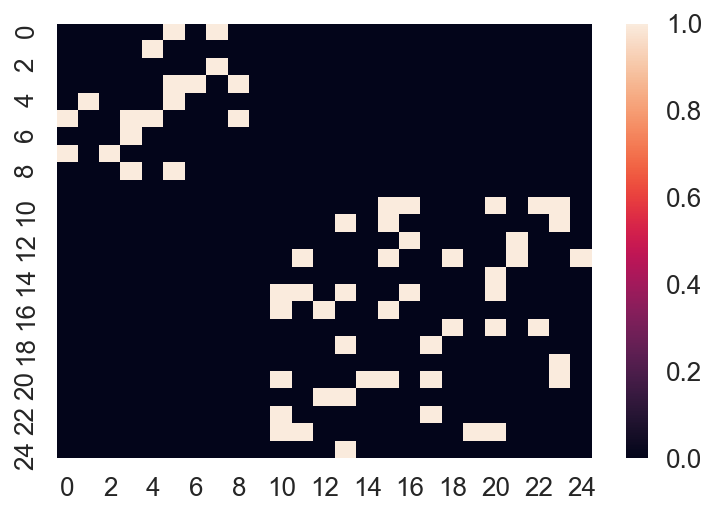 Now, notice how there's 25 nodes in total (0 to 24), and that they form what we call a "block diagonal" format. In its "dense" form, we have to represent $25^2$ values inside the matrix. That's fine for small amounts of data, but if we have tens of thousands of graphs, that'll be impossible to deal with!

You'll notice I used a function from scipy.sparse, the block_diag function, which will create a block diagonal sparse matrix from an iterable of input matrices.

block_diag is the function that I want to talk about in this post.

I had noticed that when dealing with tens of thousands of graphs, block_diag was not performing up to scratch. Specifically, the time it needed would scale quadratically with the number of matrices provided.

Let's take a look at some simulated data to illustrate this.

Let's now define a function to profile the code. 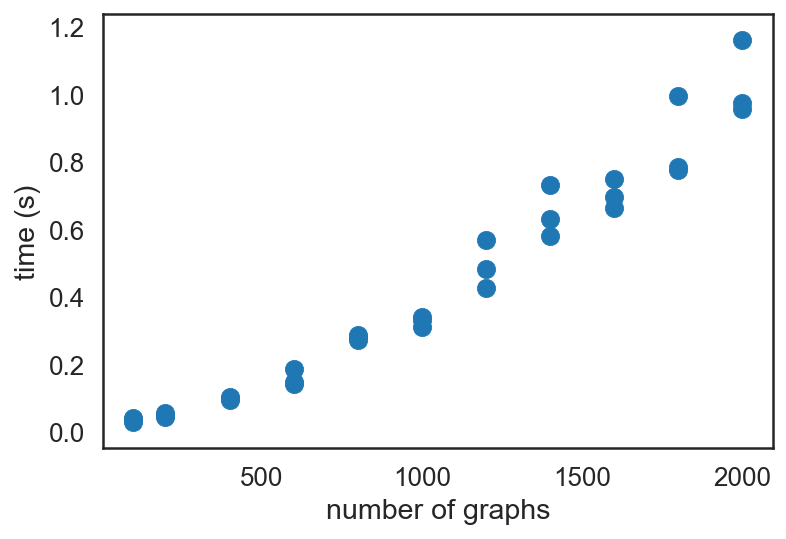 It is quite clear that the increase in time is super-linear, showing $O(n^2)$ scaling. (Out of impatience, I did not go beyond 50,000 graphs in this post, but at work, I did profile performance up to that many graphs. For reference, it took about 5 minutes to finish creating the scipy sparse matrix for 50K graphs.

Running it through the same profiling routine: 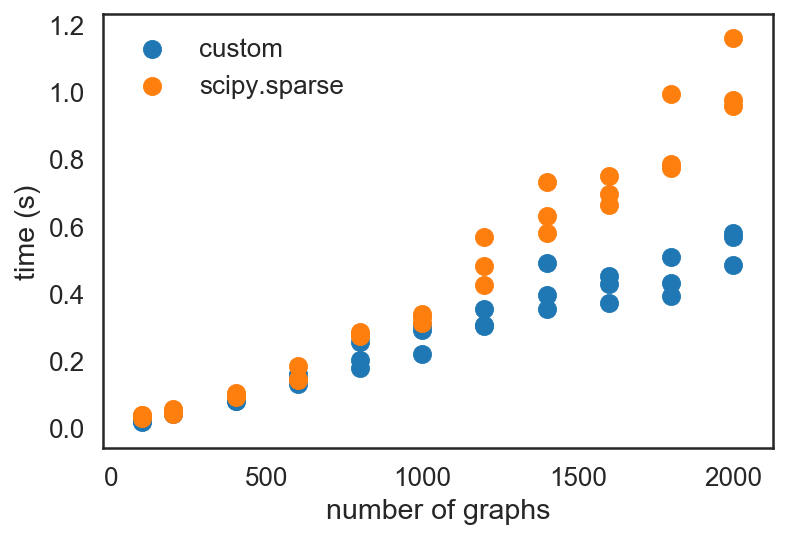 I also happened to have listened in on a talk by Siu Kwan Lam during lunch, on numba, the JIT optimizer that he has been developing for the past 5 years now. Seeing as how the code I had written in _block_diag was all numeric code, which is exactly what numba was designed for, I decided to try optimizing it with JIT. 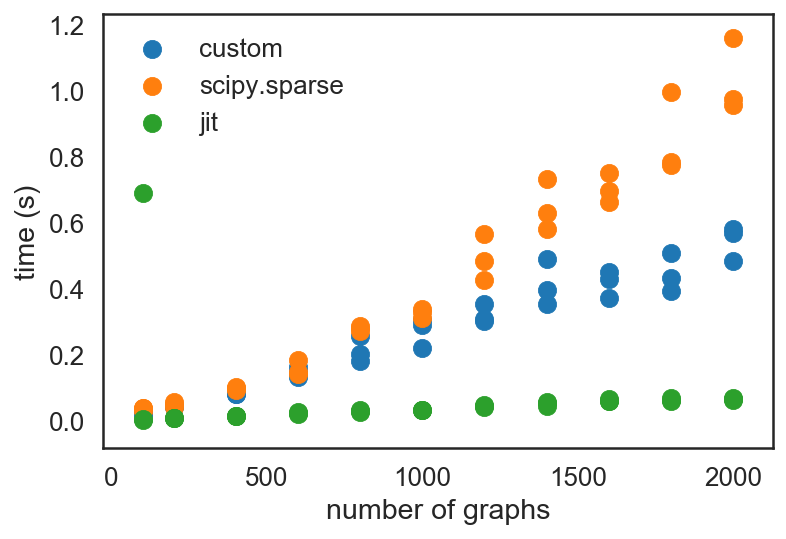 Notice the speed-up that JIT-ing the code provided! (Granted, that first run was a "warm-up" run; once JIT-compiled, everything is really fast!)

My custom implementation only returns the (row, col, data) triplet. This is an intentional design choice - having profiled the code with and without calling a COO matrix creation routine, I found the JIT-optimized performance to be significantly better without creating the COO matrix routine. As I still have to create a sparse matrix, I ended up with the following design: 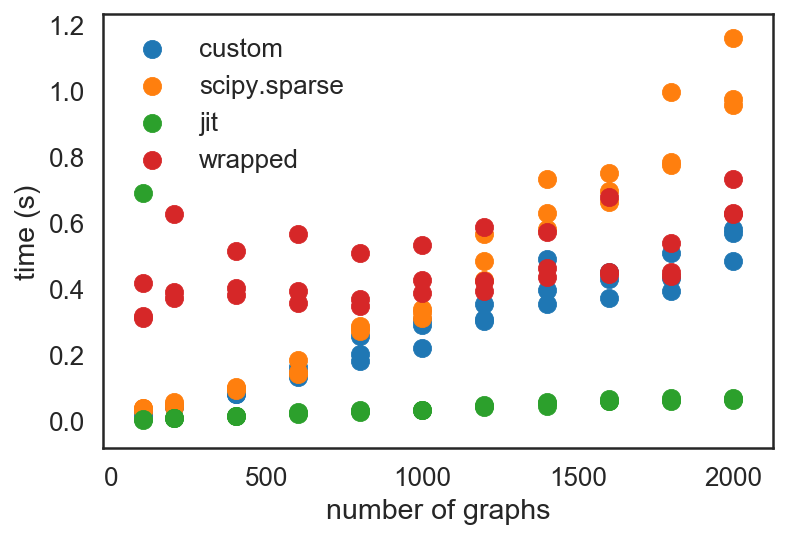 You'll notice that the array creation step induces a consistent overhead on top of the sparse matrix triplet creation routine, but stays flat and trends the "jit" dots quite consistently. It intersects the "custom" dots at about $10^3$ graphs. Given the problem that I've been tackling, which involves $10^4$ to $10^6$ graphs at a time, it is an absolutely worthwhile improvement to JIT-compile the _block_diag function.

This was simultaneously a fun and useful exercise in optimizing my code!

A few things I would take away from this:

I hope you learned something new, and I hope you also enjoyed reading this post as much as I enjoyed writing it!